JESUS SAID YOU WILL SEE THE ANGER IN HIS FACE

The Sun has unleashed its largest recorded solar flare, capping 10 days of unprecedented activity for the star. 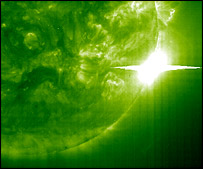 The blast sent billions of tonnes of superhot gas into space - some of it directed towards our planet.

Scientists say the Sun's current spate of activity has produced the most dramatic events seen on the solar surface since regular monitoring began.

Space weather forecasters have been kept busy tracking the impact of geomagnetic storms on the Earth. 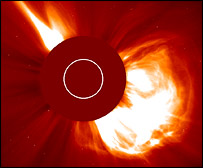 Powerful solar flares are given an "X" designation. There was an X8 and an X3 event on Sunday.

There was an X8 and an X3 event on Sunday. And on Monday, there was an X3 flare followed by smaller ones.

Last week there were X7 and X10 events that took place back-to-back.

Tuesday's flare went off the scale; researchers say it was "well above X20". A precise description is difficult because some monitoring satellites were briefly blinded by the scale of the event.

Even so, experts say the Tuesday event must have been the most powerful ever recorded, surpassing the X20 flares of 2 April 2001 and 16 August 1989.

The major flares have come from sunspot region 486, now officially the most active solar region in recorded solar observational history.

Because 486 is close to the Sun's western limb, the blast was not directed straight towards the Earth.

Nevertheless, our planet's magnetic sheath may still be hit by clouds of charged particles in the next 24 or 48 hours and could give rise to geomagnetic storms.

Skywatchers have been told to be on alert for spectacular aurorae in darkened skies.

These dancing polar lights are generated when fast-moving particles (electrons and protons) ejected from the Sun get trapped in the magnetic field around the Earth, and collide with the gases in the upper atmosphere.

Some orbiting satellites could be in the firing line, too. The mass of electrons contained in these surges can damage onboard microchips. Operations may need to be temporarily suspended to protect sensitive equipment.

And high energy radiation hitting our atmosphere could also interrupt short-wave radio transmissions and cause errors in navigation systems.

Dr Paal Brekke, deputy project scientist for the Solar Heliospheric Observatory (Soho) Sun-monitoring satellite, told BBC News Online: "I think the last week will go into the history books as one of the most dramatic solar activity periods we have seen in modern times."