AND COULD ESCALATE INTO A GLOBAL ONE

.. would really mean, ie a nuclear war which could well escalate into a global one 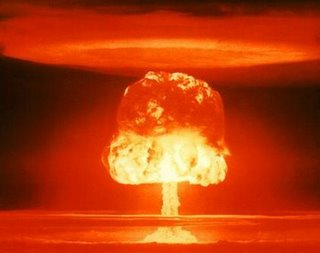 In the last 24 hours the BBC and Channel 4 News (UK) have been doing their bit to ratchet-up the current anti-Iranian propaganda war. And the quisling, Bliar, has kept his Washington handlers happy by adding his own threats ("no measures barred") to Teheran.

Were it not for the fact that what Bliar is actually doing is to add a 'diplomatic' voice in support of the Bush/Cheney thugs who actively advocate a pre-emptive attack on Iran using nuclear weapons his actions would be no more than those of a discredited right-wing plant of a politician with so much blood on his hands that a little more wouldn't worry him overmuch.

The anti-Iran propaganda war, with similarities to that which led to the invasion of Irak in 2003, is different in that the U.S. threat to use tactical nuclear weapons in a first-strike is either quietly played down or not mentioned at all.

Nor is the fact that Iran is the first country to develop a nuclear programme who, once actively supported by the USA to do so (when under the Shah), is now perceived as a 'rogue state' against whom active (nuclear) military measures might be taken for its wishing to continue that programme.

Not only is the anti-Iranian propaganda based upon a brazen, historic lie but, if the western public were to know just what kind of military scenario is envisaged, would be seen as a terrifying imperial escalation in the kind of (nuclear) blitzkrieg tactics that the West and NATO are now prepared to use.

Just now there is an ominous silence emanating from the peace movement. Perhaps those among it who have troubled to find out what an attack on Iran would really mean, ie a nuclear war which could well escalate into a global one, are so horrified at what the Bush regime are preparing for that they have been paralyzed into inaction.